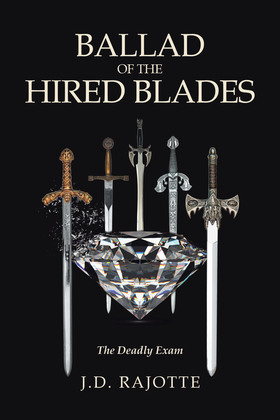 Ballad of the Hired Blades

The Deadly Exam
by J.D. Rajotte (Author)
Excerpt
Fiction Action & adventure Science fiction
warning_amber
One or more licenses for this book have been acquired by your organisation details
EPUB
Unlimited loans, One at a time
Details

Pilet Whydah dreams of joining the "Hired Blades Association", the world's premier Mercenary organization. The brash, young high school drop-out would soon find his prayers answered; when "Faxion of the Deadeye", a notorious member of the famed group passes through his mountain village. Before long, Pilet finds himself on a perilous crash course with this new friend and mentor, as he struggles to train for the deadly "Hired Blades Exam". Meeting a trio of fearsome friends along the way; swordsman Max Quinn, and the aura-casting, arcane sisters Faith and Yuuna Sierro, the group sets forth in their quest to become revered Licensed Hired Blades. But under the surface lies traces of a force far more sinister than what anyone had imagined. A parasitic entity called "The Wurm" begins to mysteriously grip the creatures of this world, and only The Hired Blades have the power to stop them.